The True Wireless segment in in-ear headphones is growing rapidly, not least thanks to Apple’s immensely popular AirPods and now AirPods Pro. The technology has the advantage of giving us small, flexible and “genuine” wireless earbuds: two, hopefully stylish, devices to discreetly tuck into the ears and enjoy sound with. But the format also has its limitations and its price (both in terms of crowns and maximum sound quality).

Plantronics (which now wants to call itself Poly, but seems to be called Plantronics almost everywhere anyway – which gets a little confusing) enters the game with the BackBeat PRO 5100 ; a pair of headphones that can be among the nicest true wireless headphones we have seen so far. Black metallic mixes elegantly with a gilded reflection surface and the solution for the silicone pillows is among the smartest and most stable we have seen: say goodbye to losing small pillows that fall off in time and out of time when you pull the shells out of your ears too quickly.

All BackBeat models have been gathered in a good and clear smartphone app of the same name, which also offers firmware updates. It’s really good to give users the chance to improve their products and iron out bugs with new software. The downside is that the update was so incredibly tough. Once we got the headphones to stay in the on position (without having them in our ears), the actual update took around 30 minutes, ironically illustrated by a rocket that is launched into the sky …

How good does the BackBeat PRO 5100 sound?

So for the fire test – how well does the BackBeat PRO 5100 sound? As usual for the format, it will be a slightly mixed bag. Our reference list of high-resolution, well-mixed music was nicely grazed – the details and warmth of singer-songwriter songs stood out with clarity, while even an exquisitely mastered pop song like Run Run Run felt like it provided satisfying bass. However, the step up to genres such as hip hop and hard rock became problematic. The bass and rap are not enough – something that is recurring for true wireless – and you should definitely have the largest ear cushions you can possibly push into the ear, otherwise it feels like you do not get any bass at all but the sound becomes sharp and hollow.

It’s also a shame that the BackBeat PRO 5100 – despite the name and price tag – does not support better audio codecs such as Apple’s standard AAC and aptX, as other price range competitors do. Here you will find only the simplest A2DP 1.3.1 and AVRCP 1.6 as well as Bluetooth 5.0.

On the plus side, we write, despite the fact that the BackBeat PRO 5100 lacks active noise reduction (ANC), they impress in how tightly they close the ear canal and still filter out the outside world – perhaps the best level we have heard so far on TW. BackBeat 5100 does well with podcasts, audiobooks and general youtube viewing, as it lifts the middle register well and does not add image.

The battery life is 6.5 hours, the case also provides several charging cycles (if you remember to charge it) and all can be quickly charged via microUSB (B) (10 min = 1 hour of use). The package should provide a total listening time of fairly standard 20 hours. However, sending microUSB at the end of 2019 still feels quite mossy, especially when you present yourself as new in a segment. It is one in the line of small savings on a headset that has been given the epithet PRO and is in some kind of premium segment (not least in terms of price).

BackBeat PRO 5100 are perhaps the nicest TW headphones we have tried so far. It envelops the listener and shuts out a lot of noise, despite the absence of the ANC. We also love the solution for the ear cushions. The problem is that true wireless technology sacrifices precious bandwidth for “flexibility” and therefore will never be the first choice for audiophiles who prioritize good sound for music across the board. The omission of codecs like AAC and aptX does not make things better either. For sound quality in the first place, on-ear covers are far superior, even if they are not close to being as flexible (or perhaps stylish).

On the other hand, for the style-conscious commuter who mostly listens to podcasts and audiobooks, watches some Youtube clips from time to time and consumes calmer types of well-mixed acoustic or singer-songwriter music, the BackBeat PRO 5100 ‘s can have a somewhat salty price tag – despite sacrificing properties – still justify a purchase or entry on the wish list for the plot. 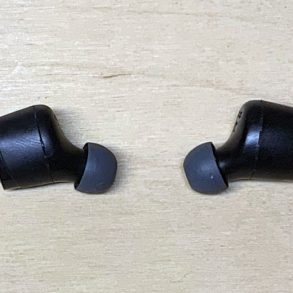