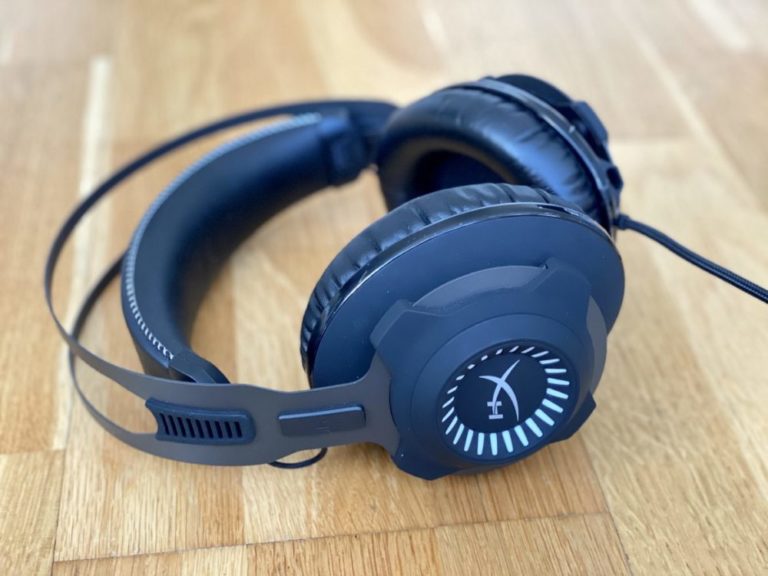 Kingston’s gaming branch, HyperX, is behind the immensely popular Cloud II headphones that you’ve probably seen in most electronics stores. Cloud II are undeniably nice-nice lures, which are supposed to make most gamers happy considering the price tag, but if you take the step up one size, it will be even more fun. Today’s consideration is certainly not fresh – Cloud Revolver S – a heated version of the HyperX Cloud Revolver model, which was released in 2017, is still highly relevant today and has been requested for testing by you readers. This time we offer our own sound card, a USB dongle with DSP processor with circuit for Dolby 7.1 surround. How good does Cloud Revolver S sound and what makes them stand out in the competition?

HyperX never misses the mark with its design, even though it may not always reach the very highest level of finesse (where we think Danish SteelSeries feels somewhat more elegant, albeit more plastic). But we are still talking gaming tricks, so these are not meant to be worn in town. The frame is made of presentable steel and has an extremely flexible and comfortable, elastic band that adjusts to the shape of the head and the covers, stuffed with the company’s own memory foam, feels airy and comfortable thanks to the right pressure and cheat skin that surrounds them and your ears. .

Here, the Cloud Revolver S shines brightest in the starry sky – they are, quite simply, among the most comfortable headphones we have ever tested. You can literally wear them all day and barely notice it, a bit like the Plantronics RIG 800 (although the Revolver S is slightly heavier and much nicer, clearly more premium in the choice of material). The covers feel airy, without losing the “proximity” in the sound and the pressure on the skull and ears never becomes stressful during the long periods we tested them.

The sound quality is, as usual with HyperX, very good. The headphones run 50mm elements, which helps the base and opens up the sound image. In games, they are absolutely excellent – the sound bubble that is painted with winds, rain, storms, song and music, mixed with first-class dialogue is reproduced with great conviction in The Witcher 3. We also played through the fresh Final Fantasy VII remake demo on PS4 with the headphones and the sound picture was exciting, warm and cool – in fact slightly “bigger” than in our threaded references Audio-Technica ADG1X.

Musically, the headphones perform almost as well, but they do not compete with hi-fi headphones directly. The larger elements favor the bottom of the base, but at the same time become less snarky than slimmer ditons. For well-mixed singer-songwriter songs, it works great, such as Aimee Mann ‘s Wise Up (It’s not going to stop) (from the great movie Magnolia), while electronic music with a rap bass, such as The Knife ‘s Silent Shout does not really come to its fullest. Right; the wit in the base gets a little too lazy.

So to the sound card then, with the Dolby chip – how good is it? The surround effect is – honestly – a very mixed bag. The USB dongle works painlessly to all formats we tested it with (Mac, PS4, PC) and acts both DSP (digital signal processor / sound card, á la Sound Blaster Play! 3) and at the same time has a button to turn on Dolby 7.1- surround. The effect of this was varied, at best. In Gears of War 5 (on PC), we experienced that certain positioning effects became clearer – the direction of the shots, among other things, while the speech instead felt more muffled. In adventure games like Broken Sword (which certainly does not have a dedicated surround sound mix), the effect became metallic and echoing, and the extra noise the Dolby processor adds also felt like a bargain. No lift to the standard mode then, rather the opposite.

As a whole, however, the headphones sound very good, especially for what they are intended for (games). But we are not entirely convinced that you have to have the DSP / surround effect.

The microphone feels a bit big and stiff, but it works fine and sounds clean and clear in play. In addition, it is detachable, which is great – then the awkwardness does not matter much.

HyperX Cloud Revolver S sounds great in games and the big USP (unique selling point) is surprisingly not the surround function and sound card, but they are the market’s most beautiful gaming headphones to wear during long gaming sessions (compared to other, threaded models). For music, they also get well approved, while the USB dongle for DSP and the surround function feels a bit lost or lost, depending on from game to game – absolutely nothing must. We drove them mostly without this and if we needed extra cream, we would rather connect Sound Blasters Play! 3, in fact that you can get for a very small amount of money today. The price tag is perhaps aaaaningen high for a pair of threaded lures, but not in any way unreasonable. The closest competitor will be the Steelseries Arctis 7, which sounds about as good, costs slightly less and is also wireless, and – in our book – slightly more elegant. But the Revolver S, on the other hand, is (even) more comfortable. So it’s a bit of a matter of priorities: if you do not require a wireless connection, the Revolver S is a good-sounding and crazy nice alternative for stretch gaming, which you should seriously consider if you are looking for new gaming tricks. It will be a warm recommendation from us and now you can apologize but we have a final boss to defeat …