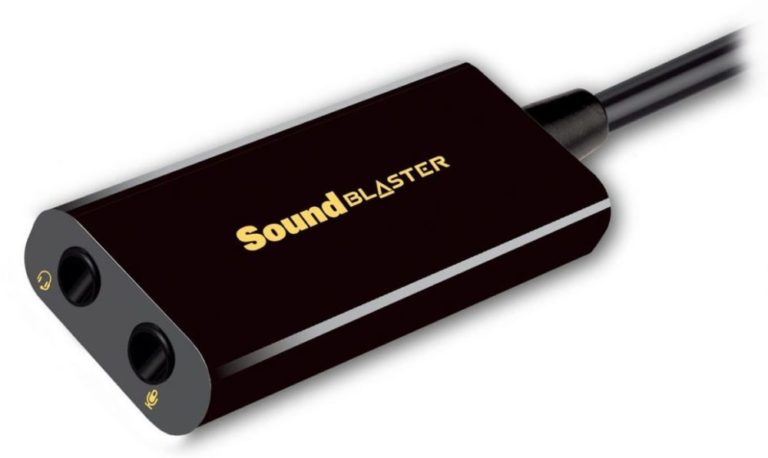 Everyone who took part in the PC turn in the 90’s has a very special relationship with Creative Labs and their Sound Blaster sound card. We screwed up countless PC jars when it went and rebuilt them basically every six months, when there was always a new sound, graphics or motherboard or a new Intel / AMD processor we just had to have for to get some more FPS in our (modest) 3D games. You who participated may remember the first Sound Blaster, which was a poor eight pieces? And certainly the early 90’s Sound Blaster 16 (pieces) that were eventually topped off with the Sound Blaster AWE64, the last years before the turn of the millennium.

With the advent of combined motherboards (with graphics and sound circuitry built in), the popularity of buying compact laptops over desktops and the editorial staff’s move to Apple’s Mac just over ten years ago, Sound Blaster has fallen into oblivion. Until recently, when we through a PR company for the company Creative Labs got part of an updated and broadened range for the 2010s (see our test of their premium headphones AURvana Platinum), where they also revived the Sound Blaster concept. But instead of an ISA circuit board you have to push in a free bus on the motherboard, Sound Blaster 2017 is a small USB dongle with built-in DAC amplifier (digital to analog converter) that gives you 24 bit sound up to 96kHz. We need DACs to get sound in all headphones that are connected analog (via 3.5mm jack), otherwise we would not get any audible sound. Converting a digital signal to analog is often a loss of quality and opens up for analog problems such as noise. But until we drive completely wirelessly or completely digitally (for example via USB or Apple’s Lightning connector), it’s something we have to live with, even on expensive luxury headphones for almost SEK 15,000. A prerequisite for getting the most out of your headphones, however, is that the DAC is of the best possible quality. And it is rare in laptops, for example.

This is really due to two things: space and cost-effectiveness. The sound circuit in the computer is fixed in the motherboard with all other electronics inside the computer and is of course affected (often negatively) by interference from electrical currents that cross. The second is that laptops are not meant to be audiophile amplifiers, but mostly work well for a wide user base. An appropriate amplifier is a separate, solid piece that is dedicated (such as a home theater amplifier). But you can hardly carry one with you. And that’s where Sound Blaster Play comes in! 3 comes in – it offers a good boost for a small penny and is highly portable.

You connect Sound Blaster Play! 3 via a standard USB port on your computer and the dongle then offers two 3.5mm jacks: one with an output signal for connecting headphones and one with an input signal for connecting a microphone. Here we really wanted two audio outputs instead; where two people could enjoy the same sound at once, a problem we often have when traveling when we are going to see a movie and can only take out the sound in a single pair of lures. And no matter how good the idea may be to clean up an analog mic, there are basically no serious mics with analog connections. It’s something you get in cheap karaoke packages, such as SingStar. All other mics, for example Blue Microphones so popular Yeti or Snowball are of course connected via USB for the best sound quality and least noise.

So what does Sound Blaster Play offer! 3 for ear candy for their SEK 250? Well, a pretty neat bag is actually pushed. The sound volume is turned up automatically – really. We almost had to run the lowest stick content on the Mac to palletize and instead adjust the volume in either the Play’s built-in app (which is hardly needed) or directly in the Spotify app / iTunes. The DAC does an impressive job in terms of size and price and gives the sound significantly more “body” and space, which makes the whole soundscape warmer and more tempting to continue listening to. Of course, your audio material is crucial, but we found that headphones that were otherwise not so easy to play directly connected to the computer actually sounded better with the dongle connected. And it must be said is a good rating for such a cheap accessory.

Just expect no miracles; you are still 90% dependent on the quality of the audio material and the use of high quality headphones. Sound Blaster Play! 3 can not conjure up an old noisy recording and make it crystal clear or make a bunch of cheap plastic headphones from charter flights sound like audiophile equipment. For its price, however, Sound Blaster Play does! 3 absolutely what they promise and are well worth the small investment – for you who want to boost your sound another notch.